Please click on the links below for further information about each Highworth Learning Community.

Amy Marcy Cheney Beach (1867–1944) was an American composer and pianist. She was the first successful American female composer of large-scale art music, playing her first solo concert at the age of 16. Her "Gaelic" Symphony, premiered by the Boston Symphony Orchestra in 1896, was the first symphony composed and published by an American woman. She was one of the first American composers to succeed without the benefit of European training, and one of the most respected and acclaimed American composers of her era. As a pianist, she was acclaimed for concerts she gave featuring her own music in the United States and in Germany.

Today, our Community flies under the banner of her name together with our ‘Bee’ logo, which was created by an AB student in 2018. We are reminded through our logo of a worker bee that working together for the benefit of everyone in our AB community will mean we will always strive for success together.

Clara Schumann (1819-1896) is considered one of the most inspirational composer-pianists of the Romantic period. Her father was a German pianist and he made her practise for two hours a day from childhood and Clara was one of the first pianists to play from memory. She married the composer, Robert Schumann and she was the main breadwinner besides bringing up 8 children. Clara was the first person to perform the work of Brahms in public and she has influenced all concert pianists since, through her emphasis on playing from memory and focusing on the intentions of the composer rather than showcasing the pianist’s technique. 2019 is the 200th anniversary of her birth.

2018-2019: CS has a great fundraising tradition and we are proud of our trophy for Pilgrims Hospice Youth Fundraisers of the Year! We raised over £1,700 for The Dogs’ Trust.  Mrs O’Reilly walked the 115 kilometre Santiago di Compostela, raising £2,500 to provide a wheelchair for a paraplegic child to play wheelchair rugby.  A number of us also helped Ashford’s first Dragon Boat Race to raise £18,000 for charity.

Dame Evelyn Glennie is the first person in history to successfully create and sustain a full-time career as a solo percussionist, performing worldwide with the greatest orchestras, conductors and artists. She fondly recalls having played the first percussion concerto in the history of The Proms at the Albert Hall in 1992, which paved the way for orchestras around the world to feature percussion concerti. She had the honour of a leading role in the Opening Ceremony of the London 2012 Olympic Games.

Dame Glennie was awarded an OBE in 1993 and now has nearly 100 international awards to date, including the Polar Music Prize and the Companion of Honour. She continues to inspire and motivate people from all walks of life. Her masterclasses and consultations are designed to guide the next generation.

JP are named after the famous British cellist – Jacqueline du Pré. She is regarded as one of the greatest cellists of all time. Her romantic style lead to international stardom by the age of 20. She regularly performed with the likes of Sir Malcolm Sargent, Rostropovich, Yehudi Menuhin, Itzhak Perlman and Daniel Barenboim, whom she later married. Her playing career was cut short after a diagnosis of multiple sclerosis, although she continued to teach when her health permitted it. Du Pré died in London on 19 October 1987 at age 42.

2020-21: The Sam West Foundation. Mrs Strange completed her #28 mile challenge and Mr Conway completed his rowing challenge on Saturday 13th March. The challenge was to complete a marathon (42,195m) on a rowing machine.

2018-19: The Paula Carr Diabetes Trust was suggested as our charity by a Year 7 student. JP raised £1954.66 through a non-uniform day and various stalls run by students during the year.

She has received many accolades throughout her career and she is famous for singing a wide range of works in many languages from the 17th to 20th centuries.  She is particularly associated with the works of Mozart, Strauss, Verdi, Handel and Puccini.  She has also found success portraying a variety of characters on stage.

Everyone taking part in the 27 27 challenge is sending a clear message: it's time to take our mental health seriously and to support our community. 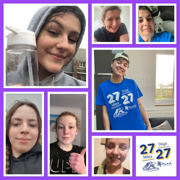 2018-19: We raised money for St Raphael’s Hospice. This charity was put forward by two students in Year 8 and we raised funds by having our non-school uniform day, creating stalls for students to buy snacks and treats at, sponsored silences and a variety of competitions.

2017-2018: We raised just under £2000 for The Paula Carr Diabetes Trust – a local charity that supports families who have children with diabetic children.

NS take their name from the American singer, songwriter, musician, arranger, and civil rights activist, Nina Simone. Born into poverty, Nina Simone taught herself music before funding all her music lessons through her own work and performances. Often heralded as the "the High Priestess of Soul"; Nina Simone is an example of a strong independent female who advocated tolerance, unity and equality for all.

2018-19: Our Community charity was the Cystic Fibrosis Trust and we raised £1693.47.  We raised funds by having our non-school uniform day, creating stalls for students to buy snacks and treats at, sponsored silences and a variety of competitions.

2017-18: Our Community Charity was Abbie’s Army and we raised over £2000, in large part thanks to a whole Community Christmas Conga.

VM are named after the British violinist Vanessa Mae. She began playing the violin aged five. At age thirteen, Vanessa-Mae became the youngest soloist to record both the Beethoven and Tchaikovsky violin concertos.

2020-21: Kent Cancer Trust. Friday 19 March was the VM Non Uniform Day. In order to raise some funds for Kent Cancer Trust, the VM Prefect Team made a Catchphrase competition for students to enjoy.

Students in VM also did a range of sponsored activities and Miss Ventress completed her challenge of running a half marathon on Saturday 20 March to raise money .  She made it around 21.1km in just over 2 hours.

2018-19: We raised £2310.20 for CALM. This charity was put forward by a student in JCL.  We raised funds by having our non-school uniform day, creating stalls for students to buy snacks and treats at, sponsored silences and a whole Community sponsored walk where students set a goal and walked that number of steps every day in June.